Involuntary churn is a subset of churn in which the cancellation event was not directly initiated by the customer. For us, this occurs when there have been four consecutive failed payments.

The reasons for the failed payments are varied, but we can assume that there are customers whose intention was to continue subscribing to the service. In most cases, they could not because their credit card either expired or was declined for one reason or another.

In this analysis we’ll start small. We’ll try to answer three simple questions about involuntary churn to gain a better understanding of where we stand:

To answer the first question, we can query the revenue_events table, which records MRR-related events like churn, upgrades, downgrades, and the like. We can join in the stripe._charges table to check whether the charges associated with the last invoice were paid or failed.

In order to answer the first question regarding the ratio of involuntary churn to total churn, we’ll want to group the churn events by a certain time-frame. In this analysis I’ll choose to group by month, but we could also do so by week. Let’s extrace the month from the created_at column.

There are values with NAs in this dataset. If we take a closer look at these subscriptions and invoices, we’ll notice that the subscriptions do not have any charges associated with them in the stripe._charges table! That seems odd - something to look into in the future.

For now, let’s group the churn data by month and calculate some summary statistics. We’ll calculate the number of churn events, the number of customers lost, and the MRR amount lost to churn.

What percentage of all churn events is made up of involuntary churn? 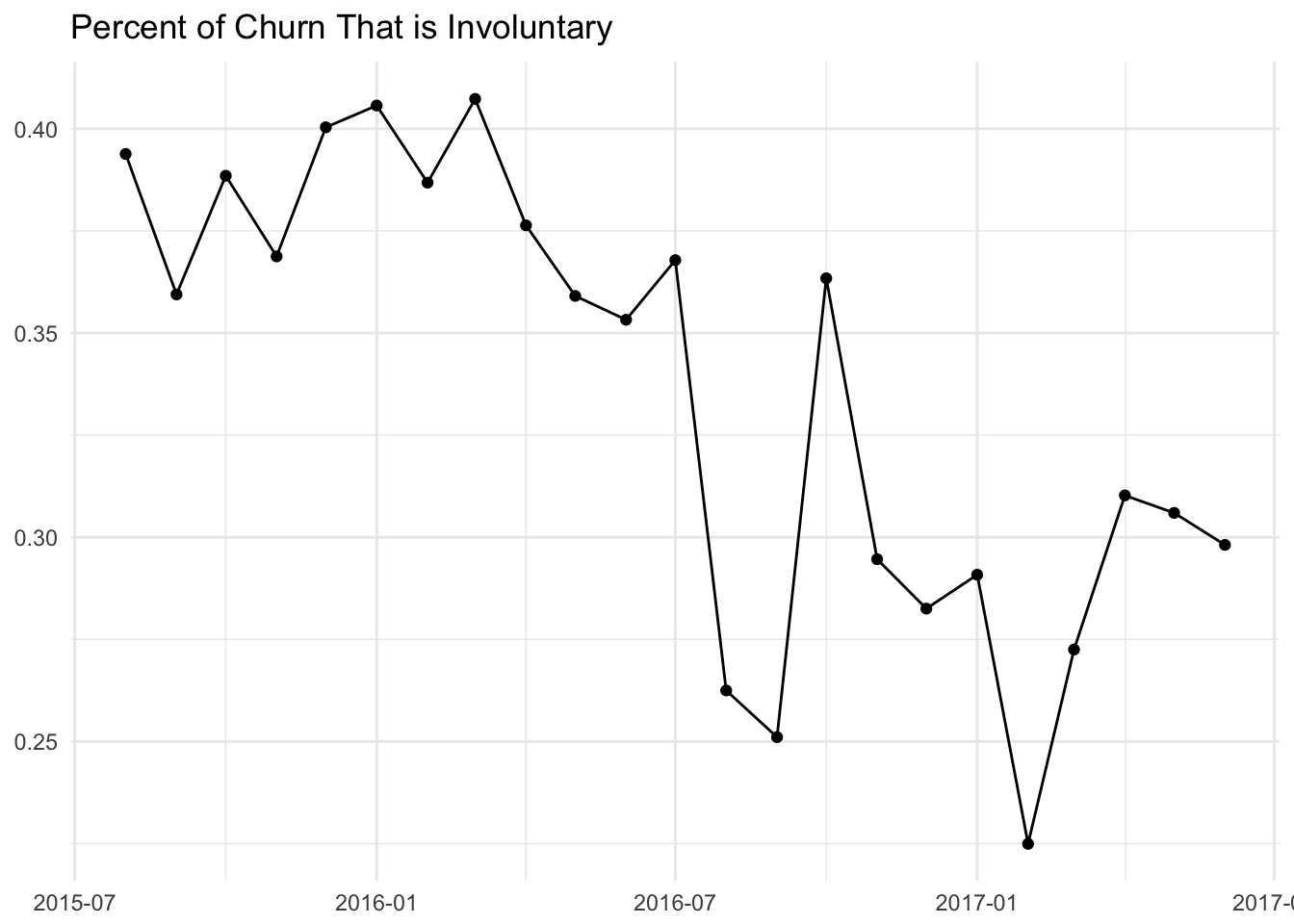 Overall it looks like there is a clear, decreasing trend. Torwards the end of 2015, around 40% of churn events ended with a failed charge! That has decreased to around 30% now, which is still a high percentage. Let’s take a closer look at June 2017. 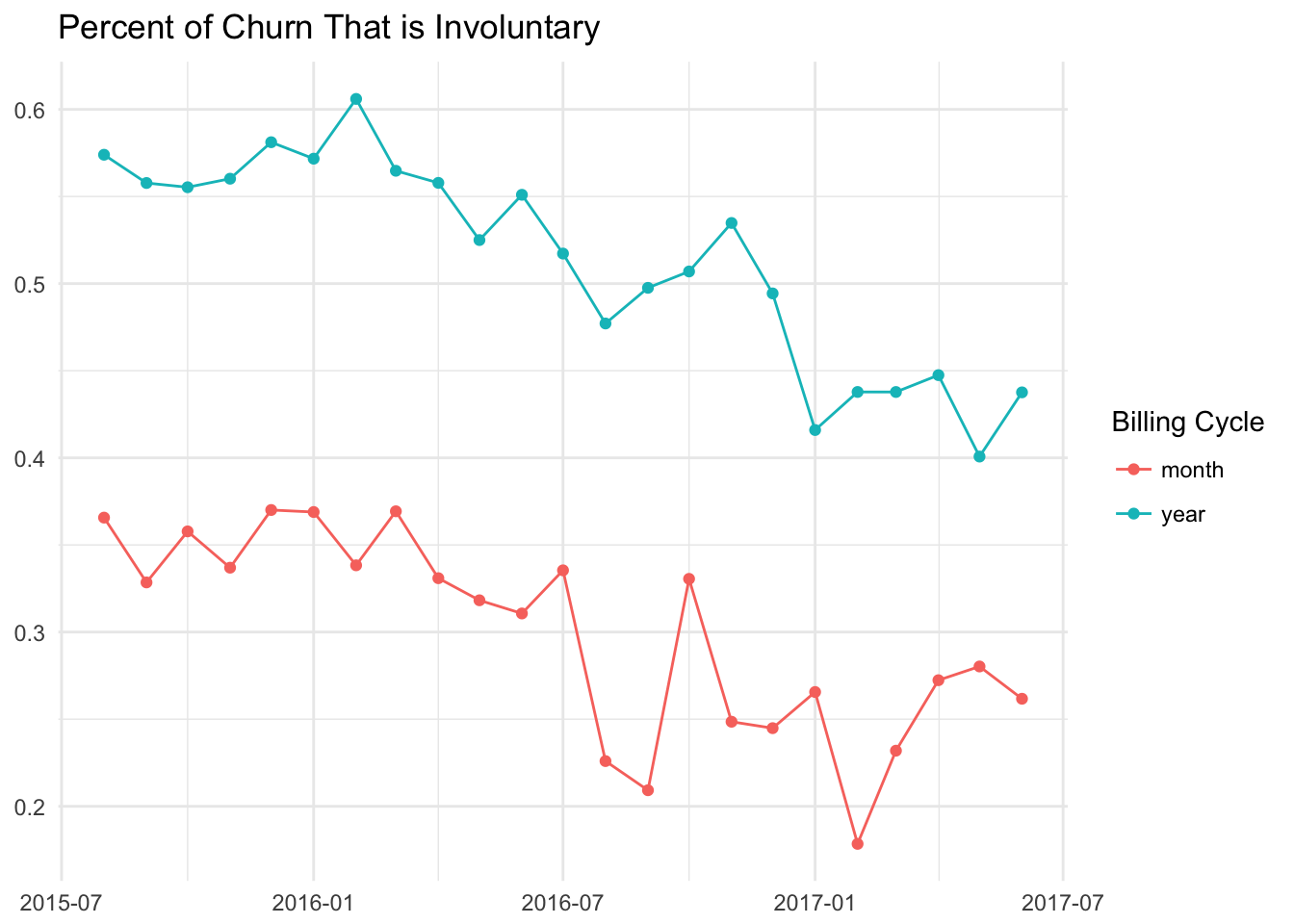 This graph makes it clear that involuntary churn is much higher for subscriptions that are billed annually. This makes sense intuitively, as there is a higher cost and a much longer time between payments. In February 2016, over 60% of churned subscriptions for annual plans ended with a failed payment!

How much MRR does this represent? 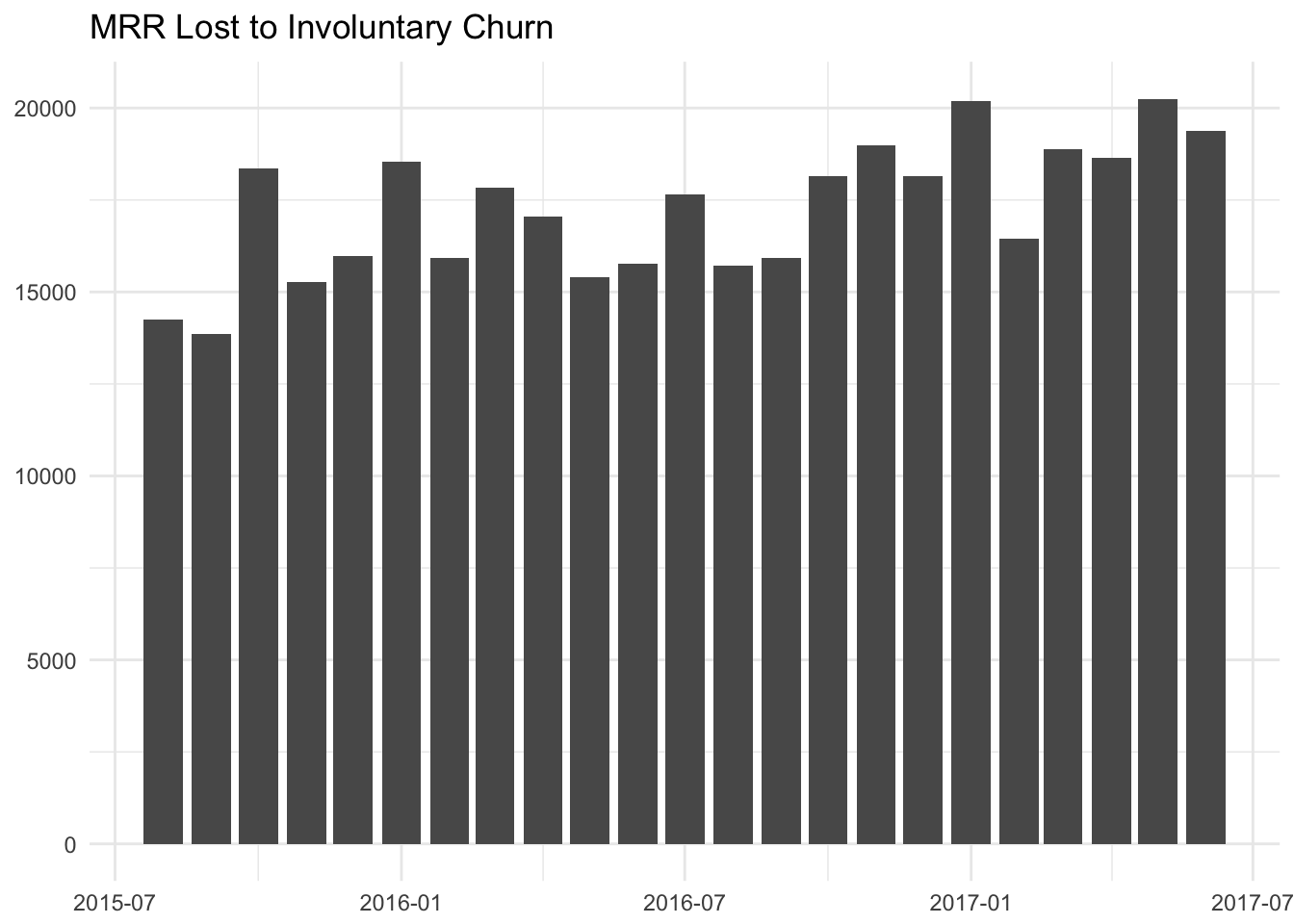 The MRR amount lost to involuntary churn is quite high. Around 15 to 20K is lost each month! This value is increasing, even though the percent of total churn that is involuntary is decreasing. This can occur when the value of each churn event increases, and the overall number of churn events also increases.

Payments fail for different reasons, some of which we can control. We may be able to assume that charges are less likely to fail if we have more information about the customer, e.g. his or her address.

Let’s check this assumption by looking at our charges in the past, and see how many of them had infomation like addresses and zip codes. We can get this data by querying the tables in Stripe’s Sigma tool. We’ll use the following query to gather the number of charges, successful or failed, each month, as well as whether or not the cards had addresses and zip codes. We’ll also be able to segment by the card type.

To begin, let’s start by just visualizing the percentage of charges that were captured over time. 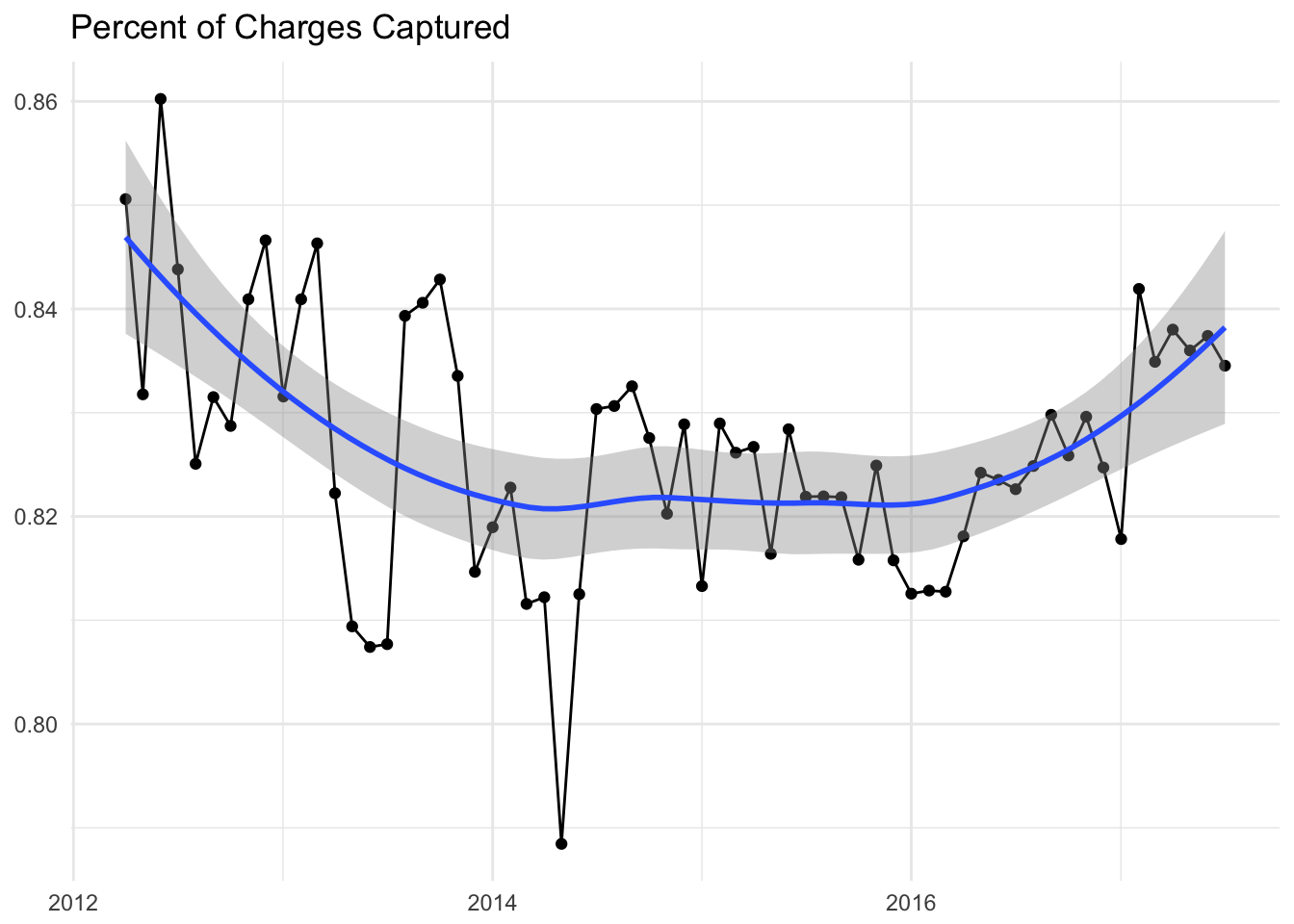 We can see that where was a decreasing trend from Buffer’s inception to the middle of 2014 - a decreasing percentage of charges were successfully paid. However, beginning around March 2016, the percentage of charges captured has been trending upward. We started collecting customers’ zip codes around March 2016, which may suggest that collecting zip codes decreased the rate of involuntary churn.

Let’s segment this data by whether or not we had the customer’s zip code at the time of the charge. We’ll filter to only graph data after March of 2016 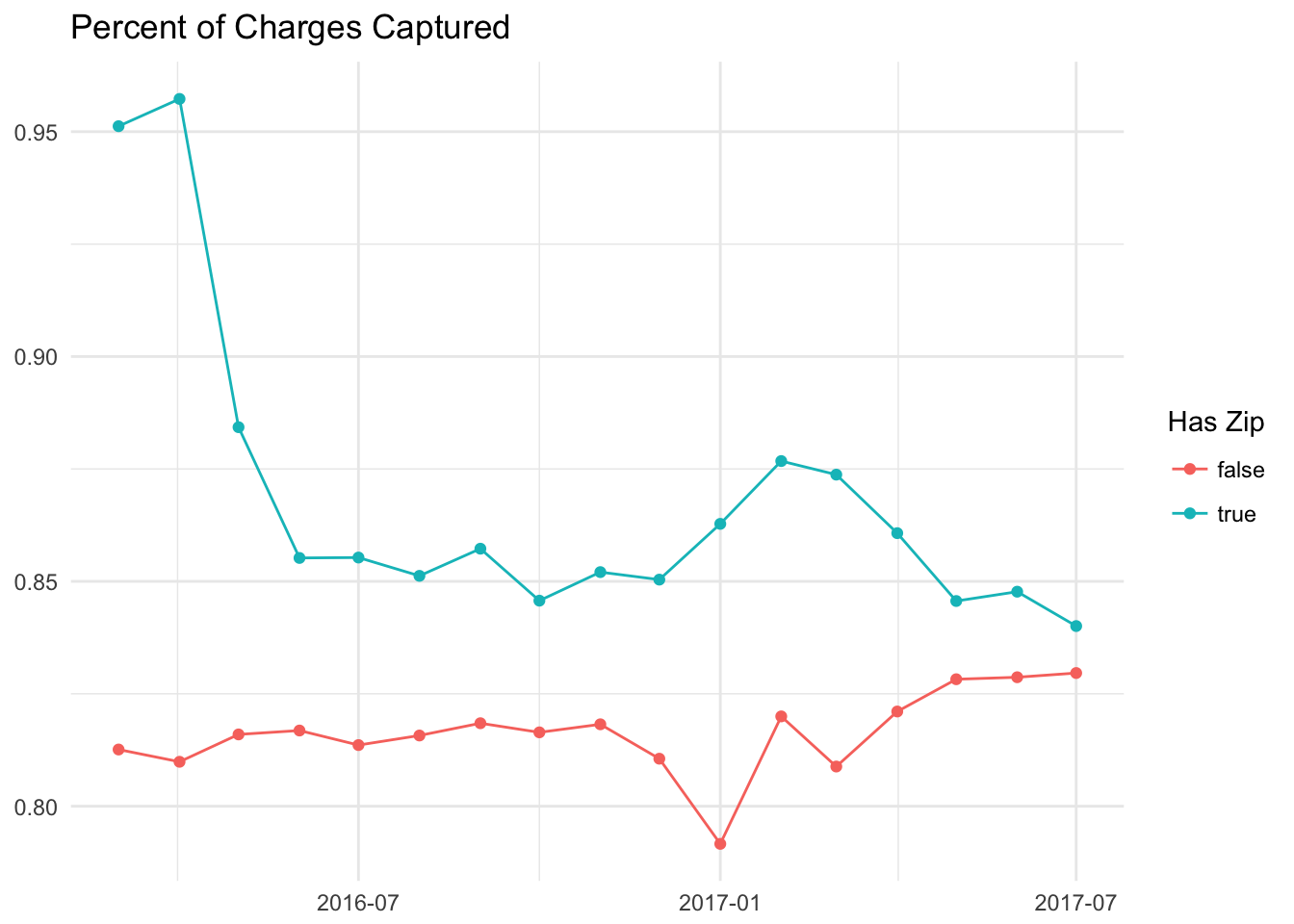 Let’s see if the type of credit card makes any difference. 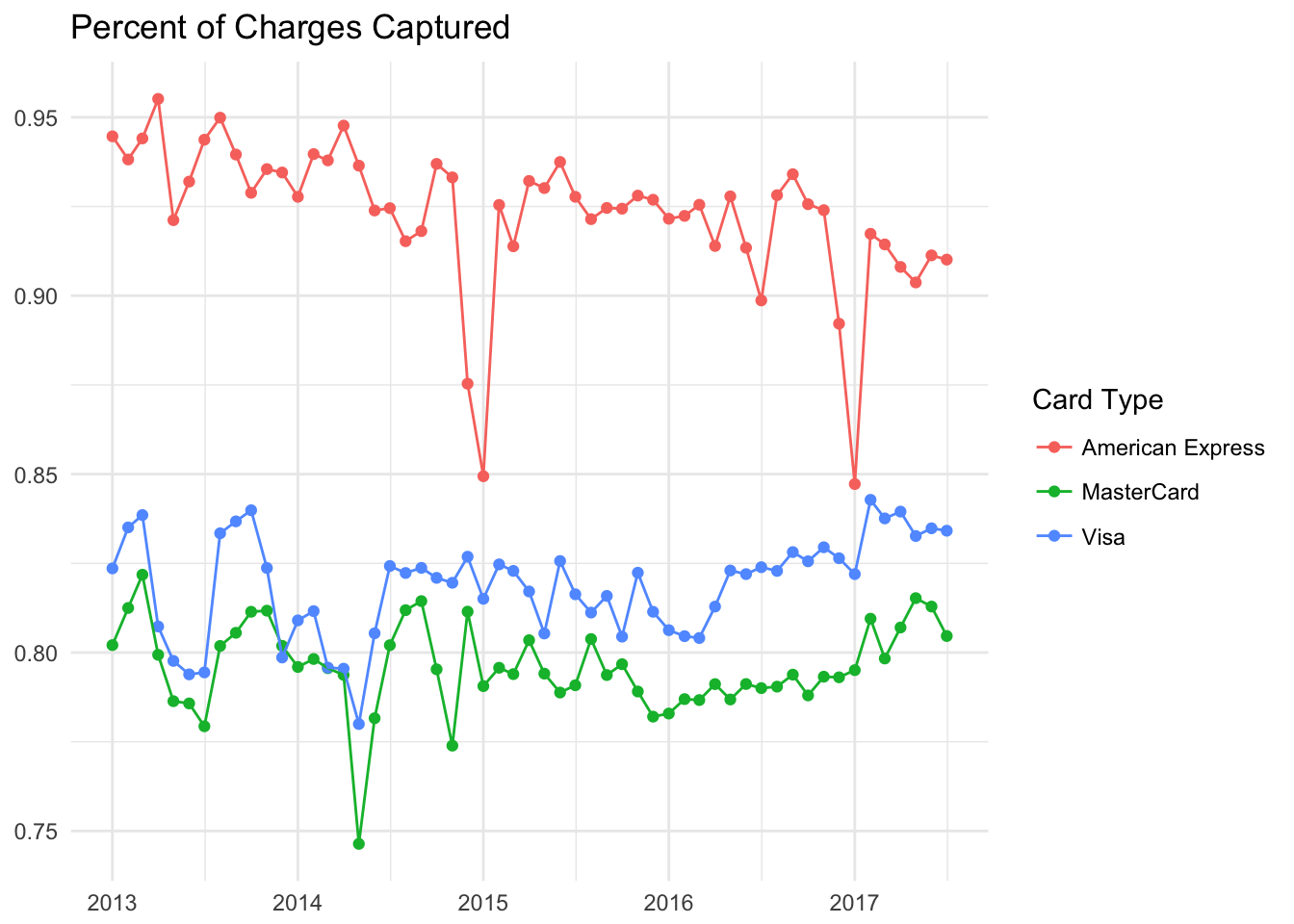 Certain types of credit cards clearly outperform others in terms of charges captured. AMEX cards have a significantly higher capture rate than Visa or Mastercard. Discover, Diners Club, and JBC all don’t seem to have large enough sample sizes to tell for sure.

Let’s plot the capture rate for each of these cards, and segment each by whether or not we had a zip code. 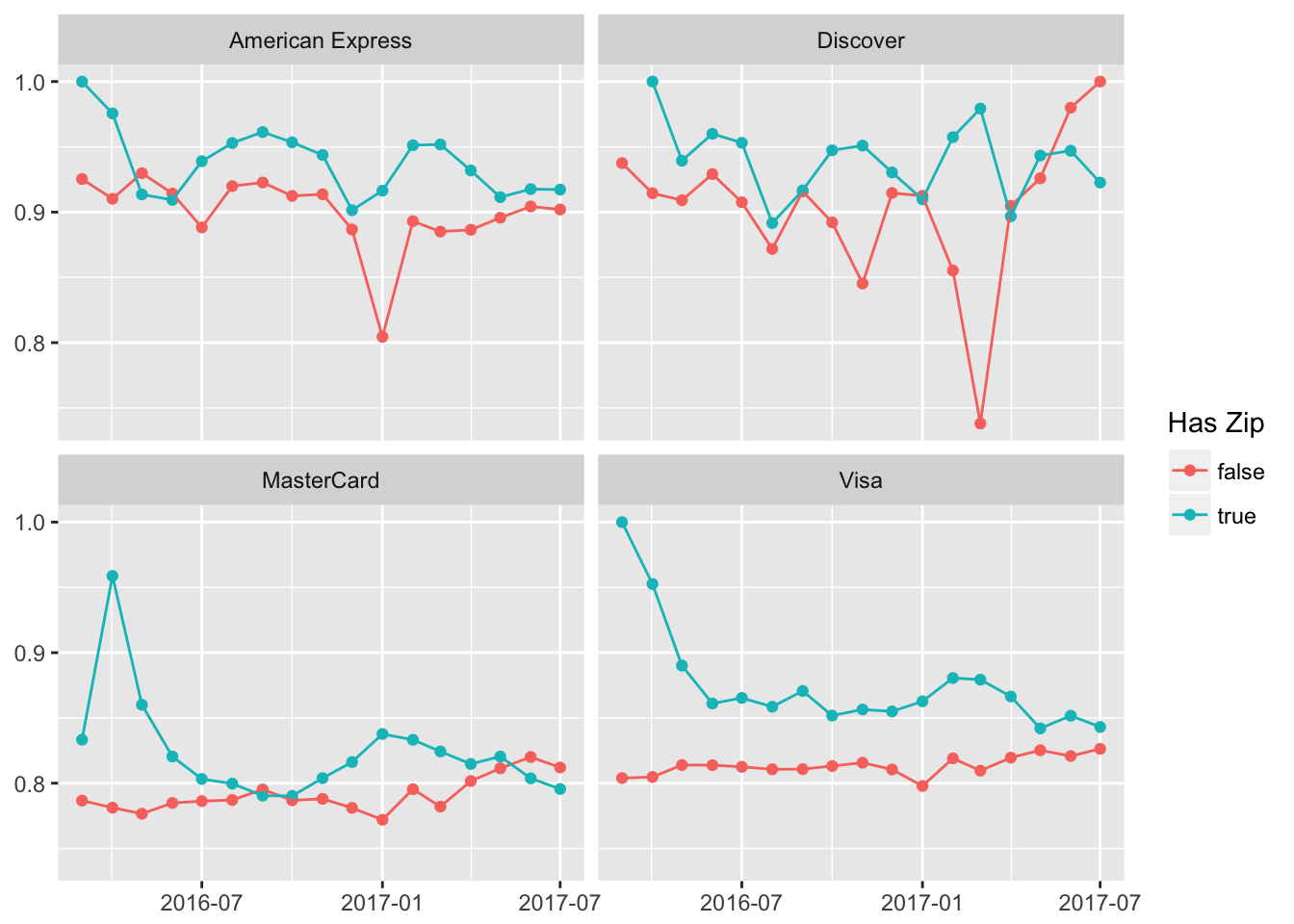 For each type of card, having the zip code improves the capture rate. Awesome! These graphs suggest that having more information decreases the likelihood of a failed payment.

Therefore I might suggest an experiment in which we also ask for users’ addresses, if they are in the US.

How does the country affect the success rate?

Let’s first plot out the success rate for US and non-US cards. 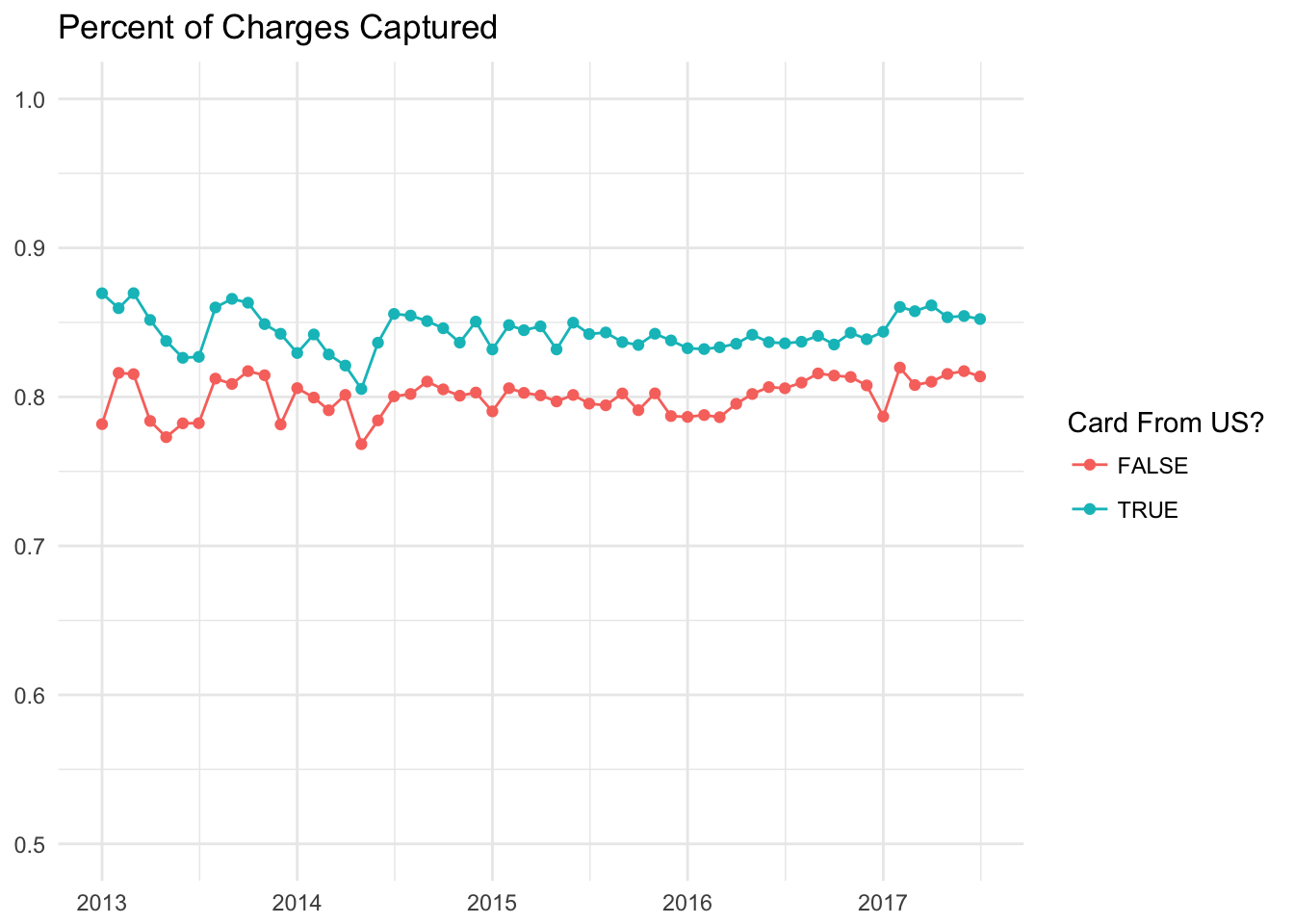 Now let’s plot out the success rate for each country that has over 3000 charges. 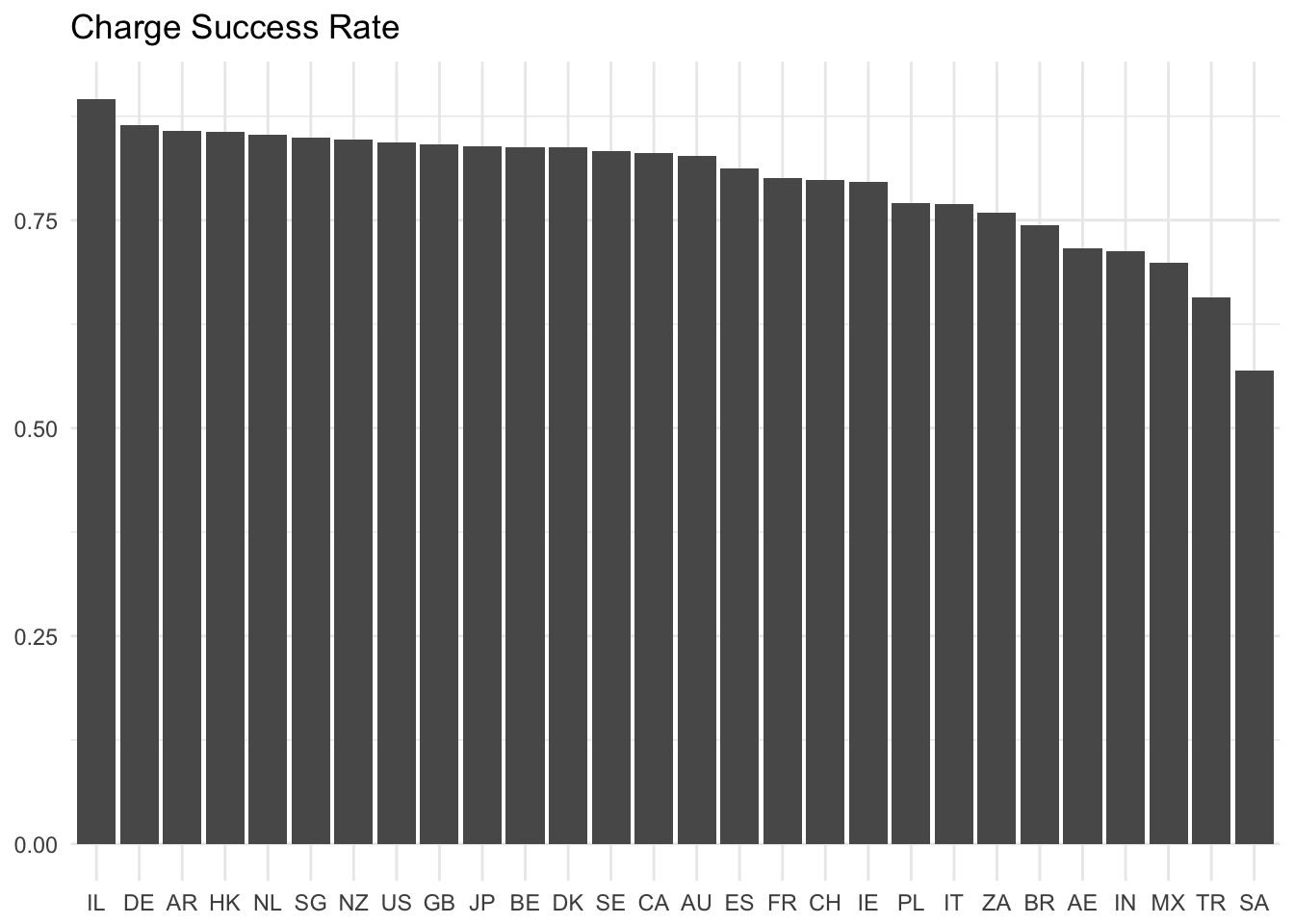 What effect to the reminder emails have?

This is harder to measure, but we can still do a bit of exploration with our dunning emails. We first need to gather the data, which we can do by querying the user_email_actions table.

We can quickly see how many of each email we’ve sent in the past year.

Because it seems that there are different names for the same email, I’m going to rename them.

It’s good to see the numbers decrease. This suggests that users took action by either updating their payment method or canceling their subscription. Now let’s look at the email actions for each email. To do this, let’s group by month and count the number of users that took each type of action.

Now we need to spread the data, so that each month, email, and event_type combination has a user count in it’s own column.

For some reason, we only have the proper email counts from May 2017 onwards! Let’s see if we can calculate open rates, after filtering out incomplete months.

Now let’s plot the open rates for each month. 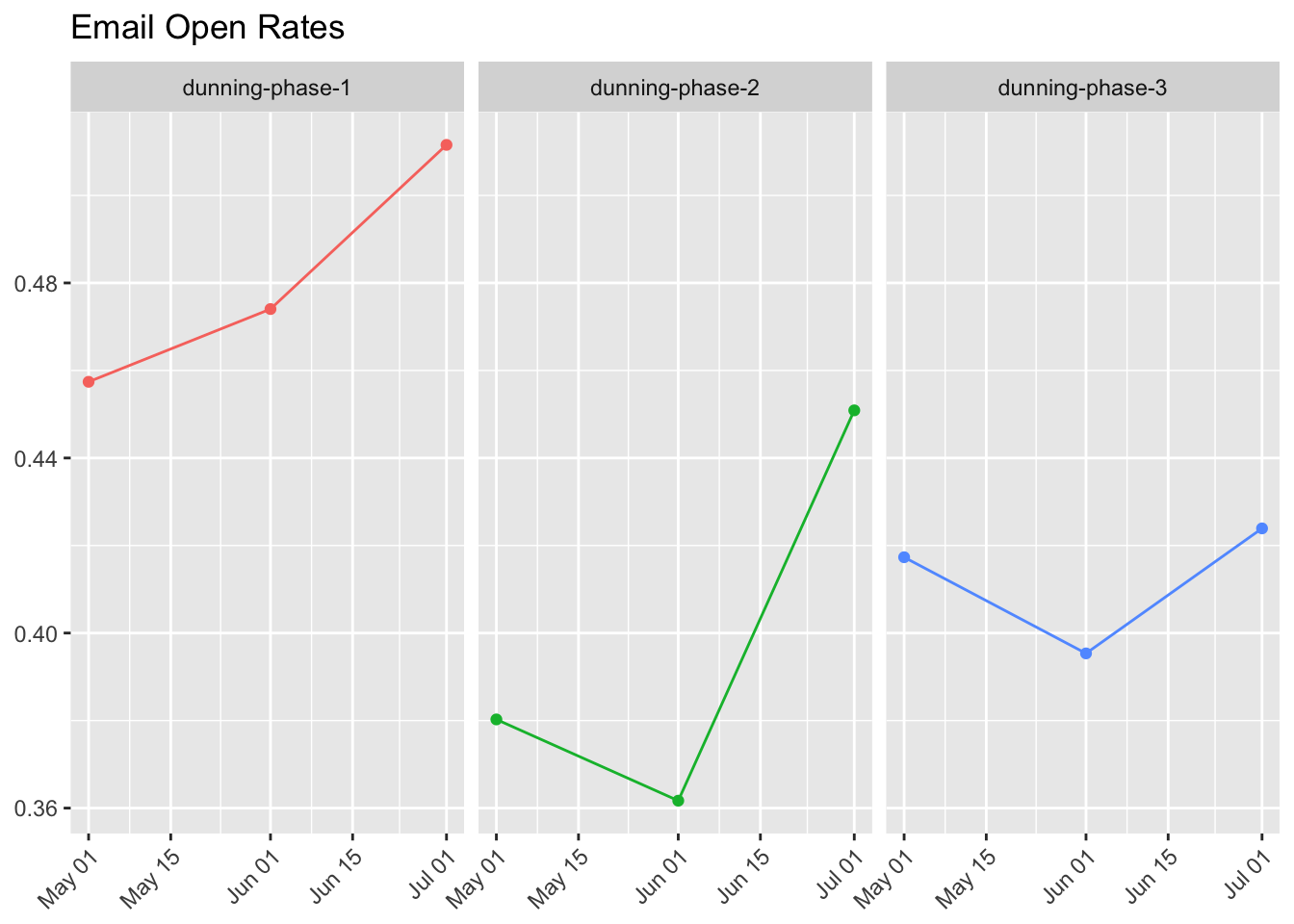 What if we instead wanted to look at click through rates? We can define this as the proportion of users that were sent the email that clicked through the CTA. 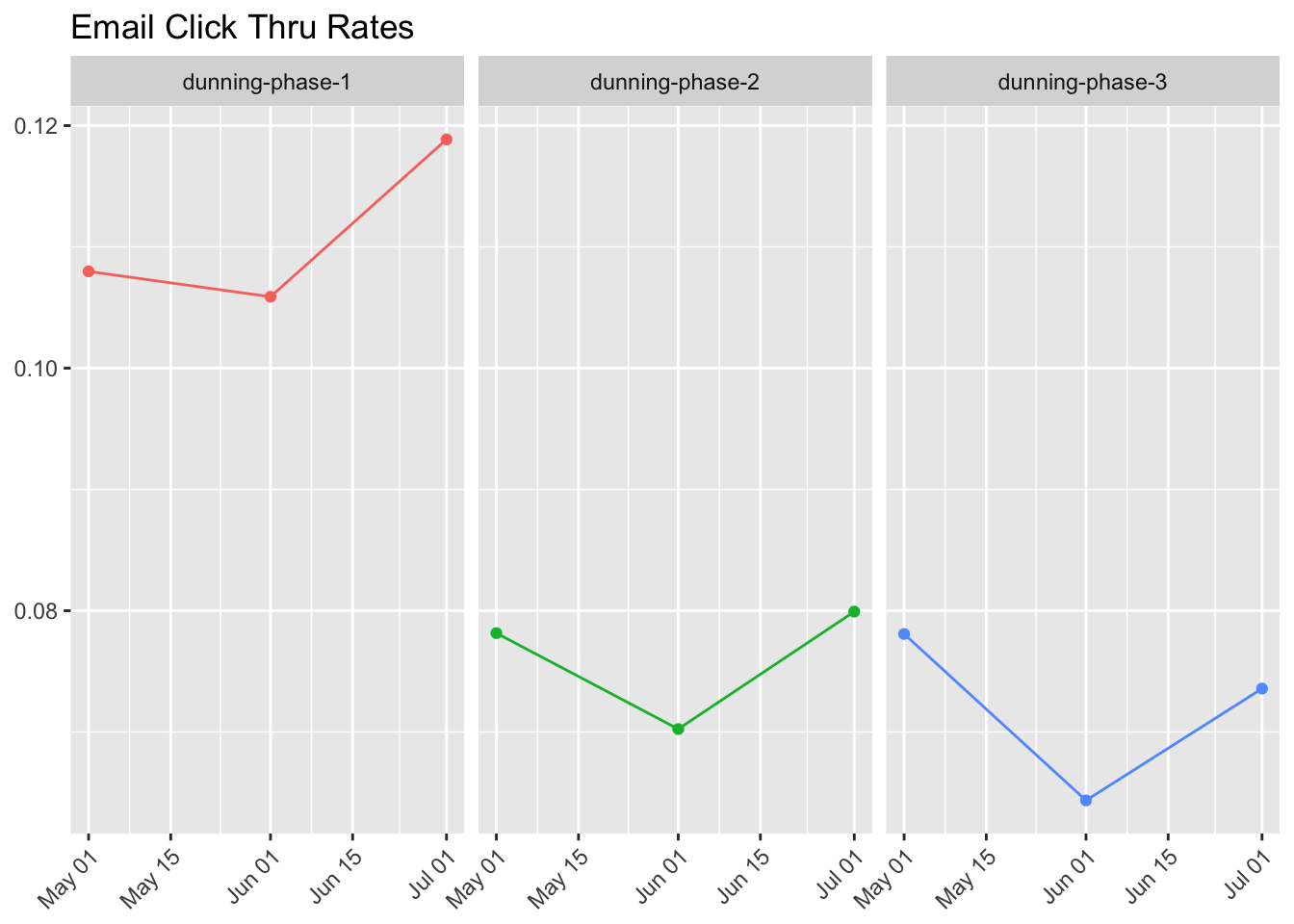 These seem like fairly decent open rates, but low click-thru rates. Unfortunately, we don’t track a client_id for these events, so I’m not sure how we can see how many of these emails were opened on a mobile device. We might need to use SendGrid or Mailchimp for that.

The data suggests that involuntary churn makes up a significant portion of our overall churn, over 30%. This ratio has been decreasing substantially over the past two years. Subscriptions that are billed annually have much higher involuntary churn rates than those charged monthly.

Involuntary churn accounts for around 15-20 thousand dollars in MRR lost each month.

Having the customer’s zip code decreases the rate in which payments fail, and I would suggest experimenting with collecting users’ addresses, to further decrease the failed payment rate.

Our dunning emails have relatively high open rates and decent click through rates, but we are unable to tell at the moment how many are opened on mobile devices. We are also unable to say, or estimate, the effects that the emails have on involuntary churn at this time. We may need to run a controlled experiment to make that estimate. :)

In the future, I would like to calculate involuntary churn rates segmented by country. A charge may be more likely to fail if the customer does not live in the United States. We may be able to mitigate some of this risk by asking for more information about the customer when we try to collect payments.