I was inspired by this series of blog posts from the Looker team to do my own Game of Thrones inspired data analysis. While Looker’s analysis focuses on the screentime of different characters in the show, I thought it would be interesting to take a different approach and analyze the text corpuses of the George R. R. Martin’s books.

I was particularly inspired by Julia Silge’s analysis of gender roles in Jane Austen’s works, and took a similar approach to exploring the Game of Thrones data.

We will look at the words that are most closely associated with gendered pronouns like “he” and “she” to try to gain a better understanding of how men and women are portrayed in the series.

Julia Silge and David Robinson’s tidytext package is leaned on heavily in this analysis, as is Stanford’s CoreNLP library for natual language processing. Shall we begin?

We begin with five txt files containing the text of the first five novels. To read the data into R, we’ll read in each text file with the readLines() function and bind them into a single dataframe.

We now have the text of the books in a single dataframe. Let’s clean it up by removing lines in which there is no text.

Here is some context on the idea of tidy data taken from the book Tidy Text Mining with R:

Using tidy data principles is a powerful way to make handling data easier and more effective, and this is no less true when it comes to dealing with text. As described by Hadley Wickham (Wickham 2014), tidy data has a specific structure: - Each variable is a column - Each observation is a row - Each type of observational unit is a table

To get our data into a tidy format, we need each value, or token, to have its own row. We can use the unnest_tokens() function to do this for us. We will end up with a dataframe in which there is one word (token) per row. Associations with the word, like the book or line in which it appeared, would be preserved.

Now we want to remove words like “a” and “the” that appear frequently but don’t provide much contextual value. We’ll remove these stop words by “anti-joining” them with our tidy data frame, thus making sure that all stop words are excluded.

Alright. Let’s list and visualize the most frequently occuring words in the Game of Thrones books. 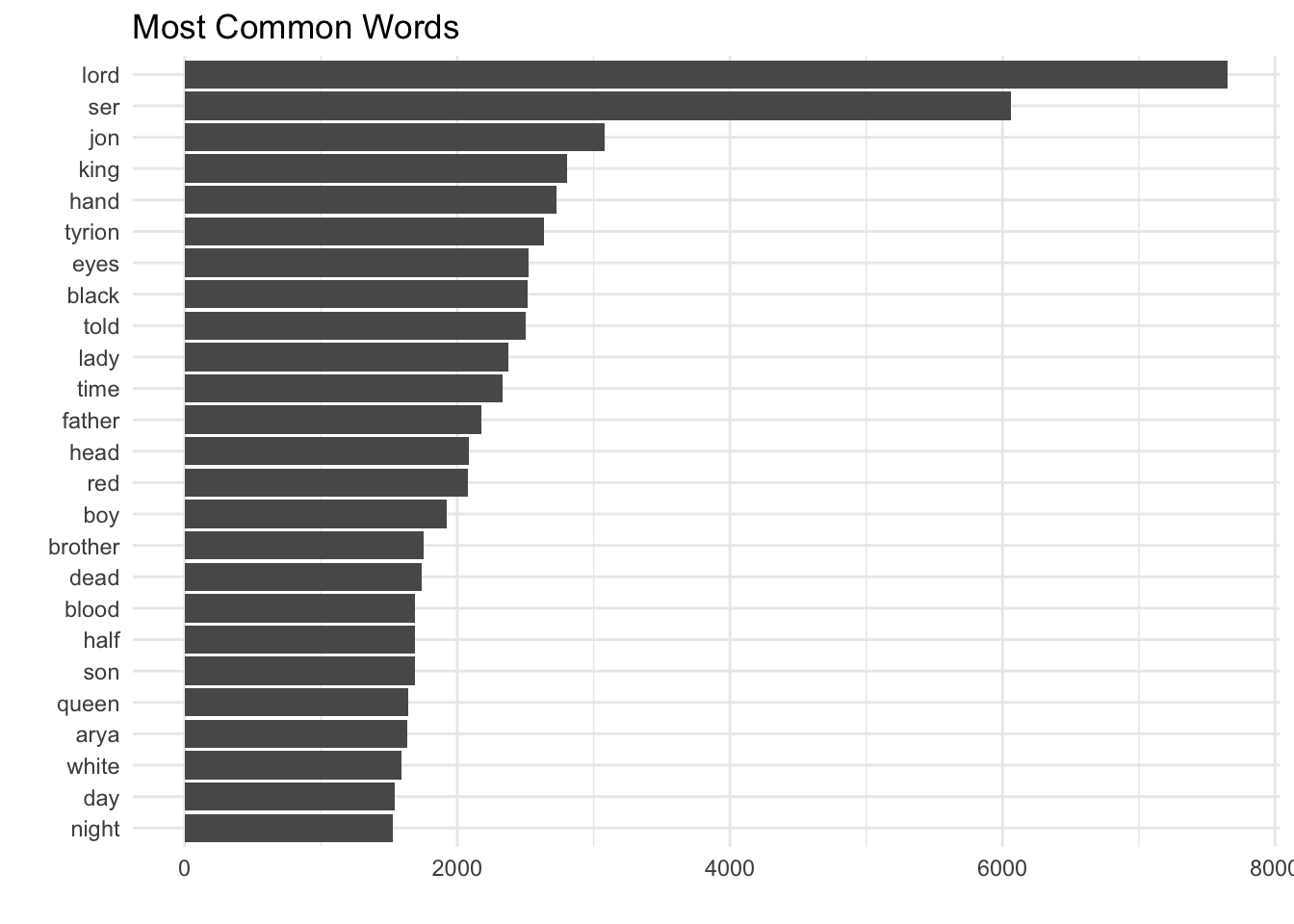 We can see that titles like “lord”, “ser”, and “king”, and names occur most frequently. The frequent occurrence of words like “dead”, “blood” gives us a sense of the violence that these works contain.

We still don’t have a great understanding of the context in which these words occur. One way we can address this is by finding and analyzing groups of words that occur together, i.e. n-grams.

An n-gram is a contiguous series of n words from a text; for example, a bigram is a pair of words, with n = 2.

We will use the unnest_tokens function from the tidytext package to identify groups of words that tend to occur together in the books. When we set n to 2, we are examining pairs of two consecutive words, often called “bigrams”.

Now that we have our n-grams, we can visualize the most popular ones. 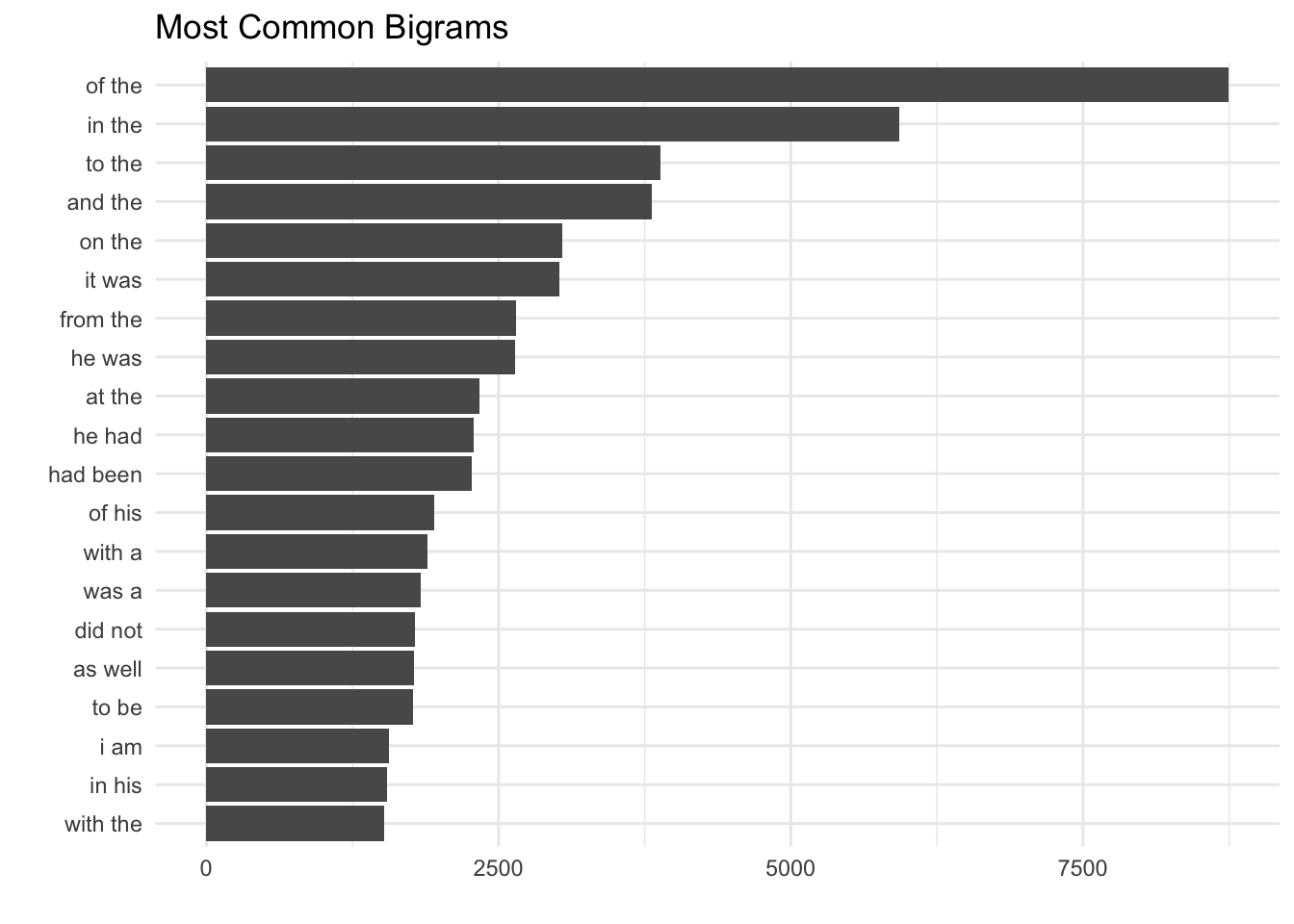 This list is full of stopwords that don’t give us value. We can remove them by separating the two words in the bigram, removing stopwords, and reuniting the words into bigrams.

Now we can plot the most common bigrams, excluding stopwords. 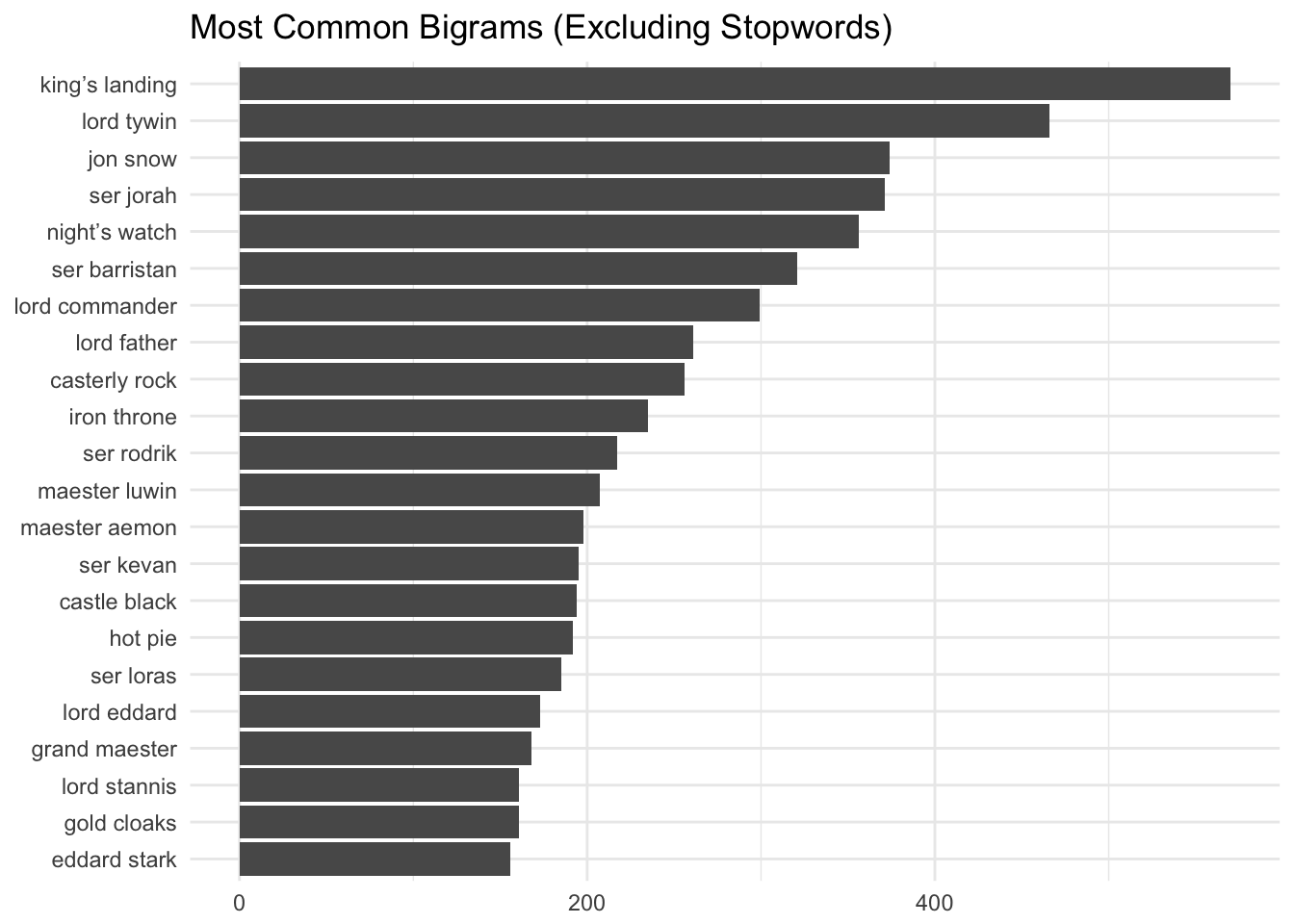 Most of these bigrams are titles or names, which is similar to what we saw when we visualized the most frequently occuring individual words. Also, hot pie. :)

This study by Matthew Jockers and Gabi Kirilloff utilizes text mining to examine 19th century novels and explore how gendered pronouns like he/she/him/her are associated with different verbs.

These researchers used the Stanford CoreNLP library to parse dependencies in sentences and find which verbs are connected to which pronouns, but we can also use a tidytext approach to find the most commonly-occuring verbs that appear after these gendered pronouns. The two pronouns we’ll examine here are “he” and “she”.

We can identify these “gendered” bigrams by finding all bigrams in which the first word is “he” or “she”. 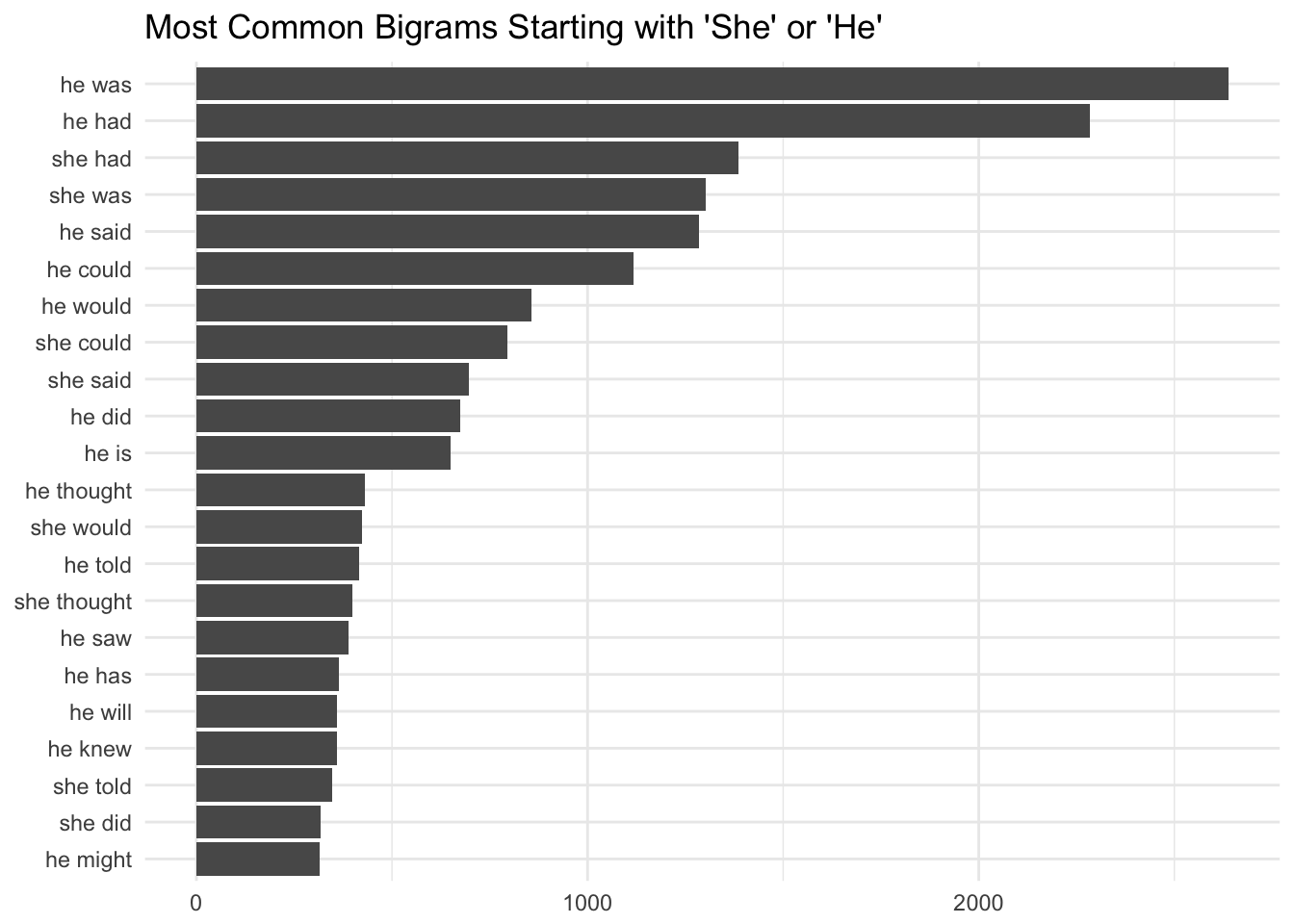 We can take a different approach and calculate the log odds ratio of words related to “he” and “she”. This will help us find the words that exhibit the biggest differences between relative use after our gendered pronouns.

Which words have about the same likelihood of following “she” or “he” in the series?

Words like “caught”, “sat”, and “found” are about as likely to come after the word “she” as the word “he”. Now let’s look at the words that exhibit the largest differences in appearing after “she” compared to “he”. We can do this by sorting words by the magnitude of the log odds ratio of words. 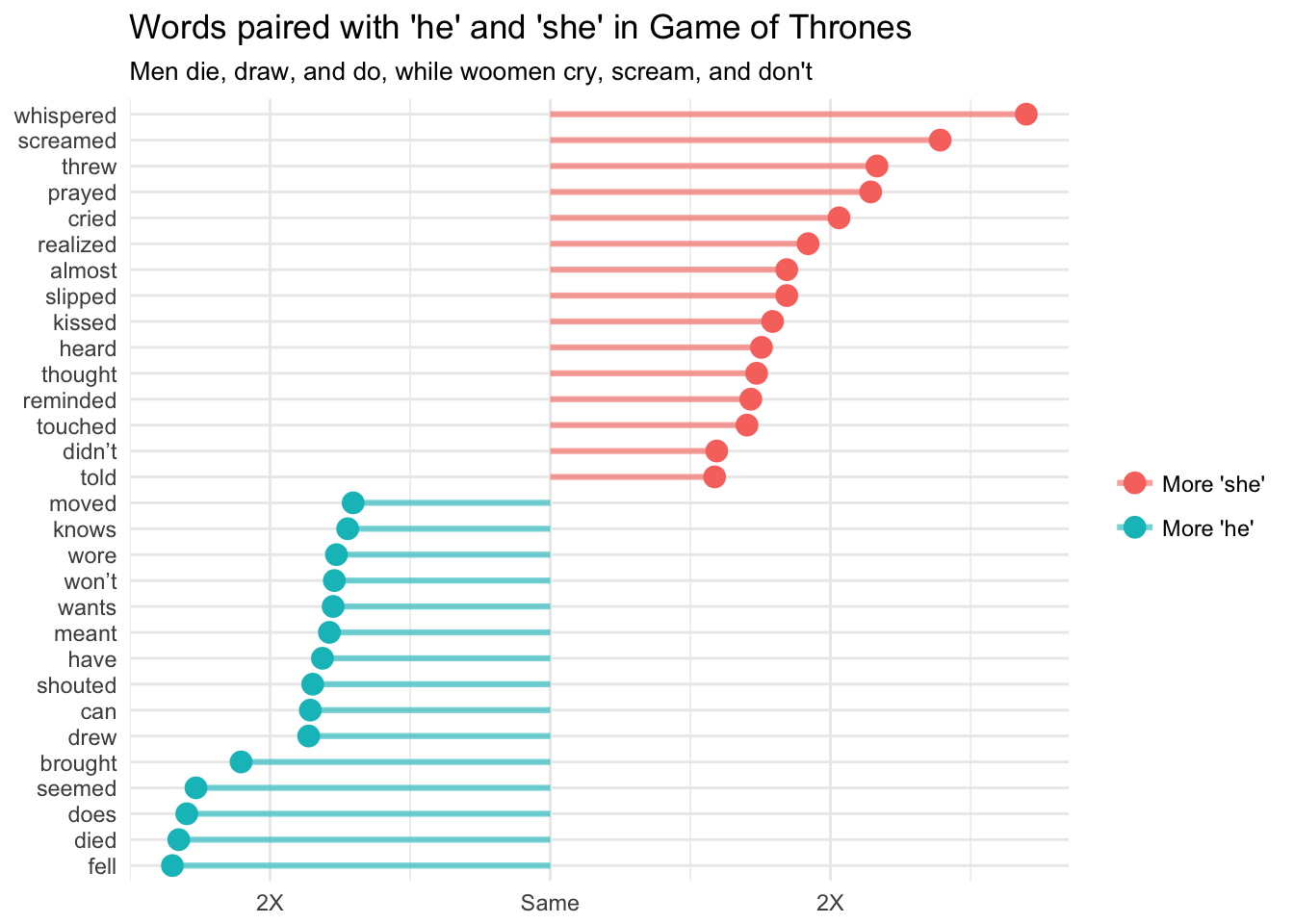 The portrayal of women in the Game of Thrones series is a got discussion topic. We also know that certain women in the show and books are portrayed in different ways. Women like Arya might be described by terms more closely resembling those that are associated with the pronoun “he”, whereas other women are not.

We can take advantage of the powerful CoreNLP library to find words that are closely associated with specific characters, regardless of where they appear together in a sentence.

Let’s use the Stanford CoreNLP library to parse dependencies in sentences and find which verbs are connected to certain proper nouns and pronouns.

Because our input is a text string we set as_strings to TRUE (the default is to assume that we are giving the function paths to where the input data sits on the local machine“):

Here, we used the spaCy backend.The returned annotation object is nothing more than a list of data frames (and one matrix), similar to a set of tables within a database.

Named entity recognition is the task of finding entities that can be defined by proper names, categorizing them, and standardizing their formats. Let’s use this approach to get the names of the main characters.

Cool! Now that we have the names of the main characters, we can examine the relationship between the names and certain key words.

Dependencies give the grammatical relationship between pairs of words within a sentence. We’ll use the get_dependency() function to find dependencies between words in the books.

The word is related to the target, and the relationship is defined in the relation column. We’re more interested in the lemma and lemma_target as they have been standardized for us. The relationship we’re most interested in is direct dependency (nsubj for nominal subject). Let’s filter the results to show words that are directly dependent on one of our main characters’ names.

Cool! At this point, we may be interested in seeing words that appear more frequently for certain characters than for others. To do that, we can calculate each term’s inverse document frequency (tdf), defined as:

Now that we’ve calculated tf-idf for each of our main characters, we can visualize the words that are closely associated with them, relative to the word’s association with the other characters. 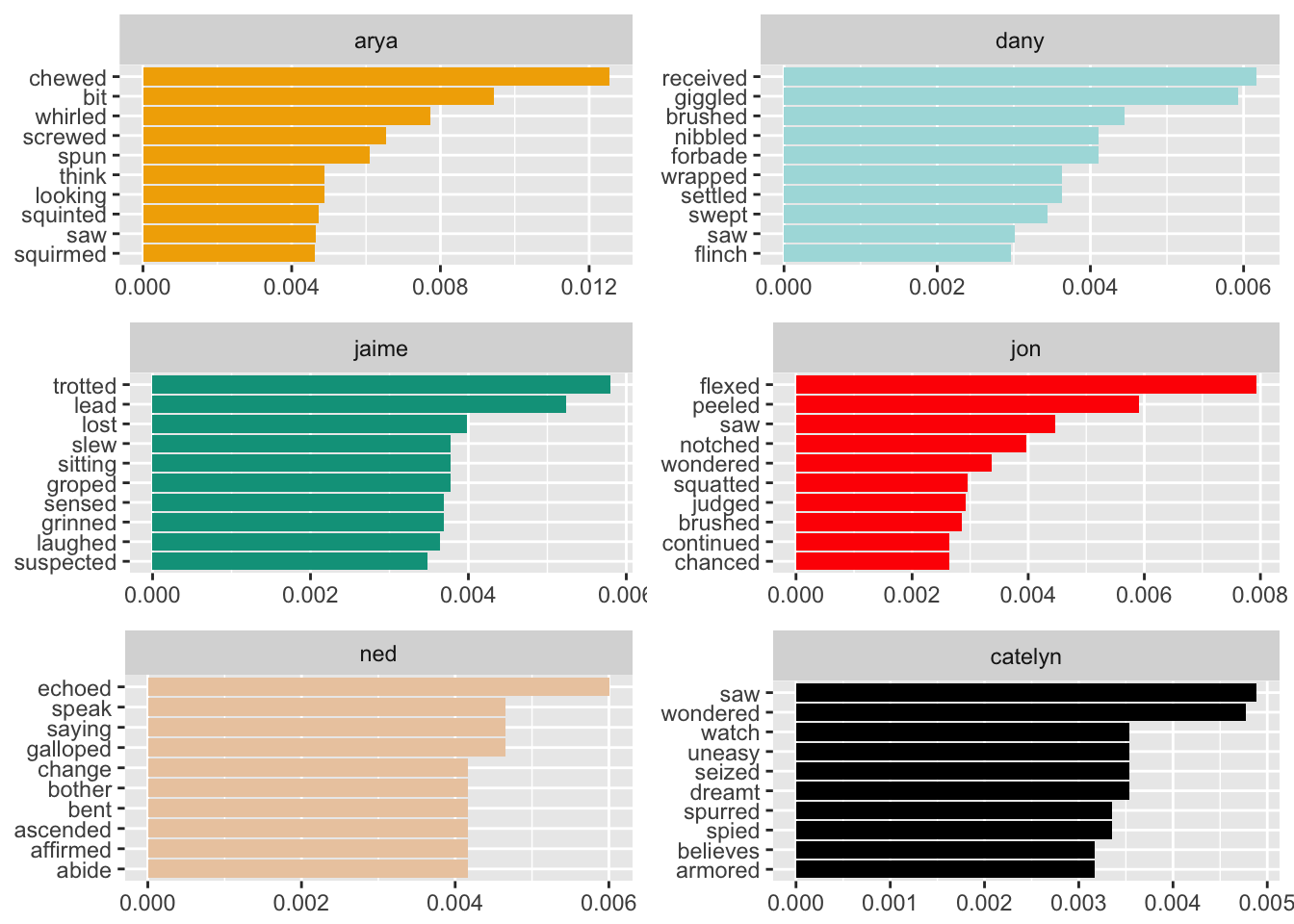 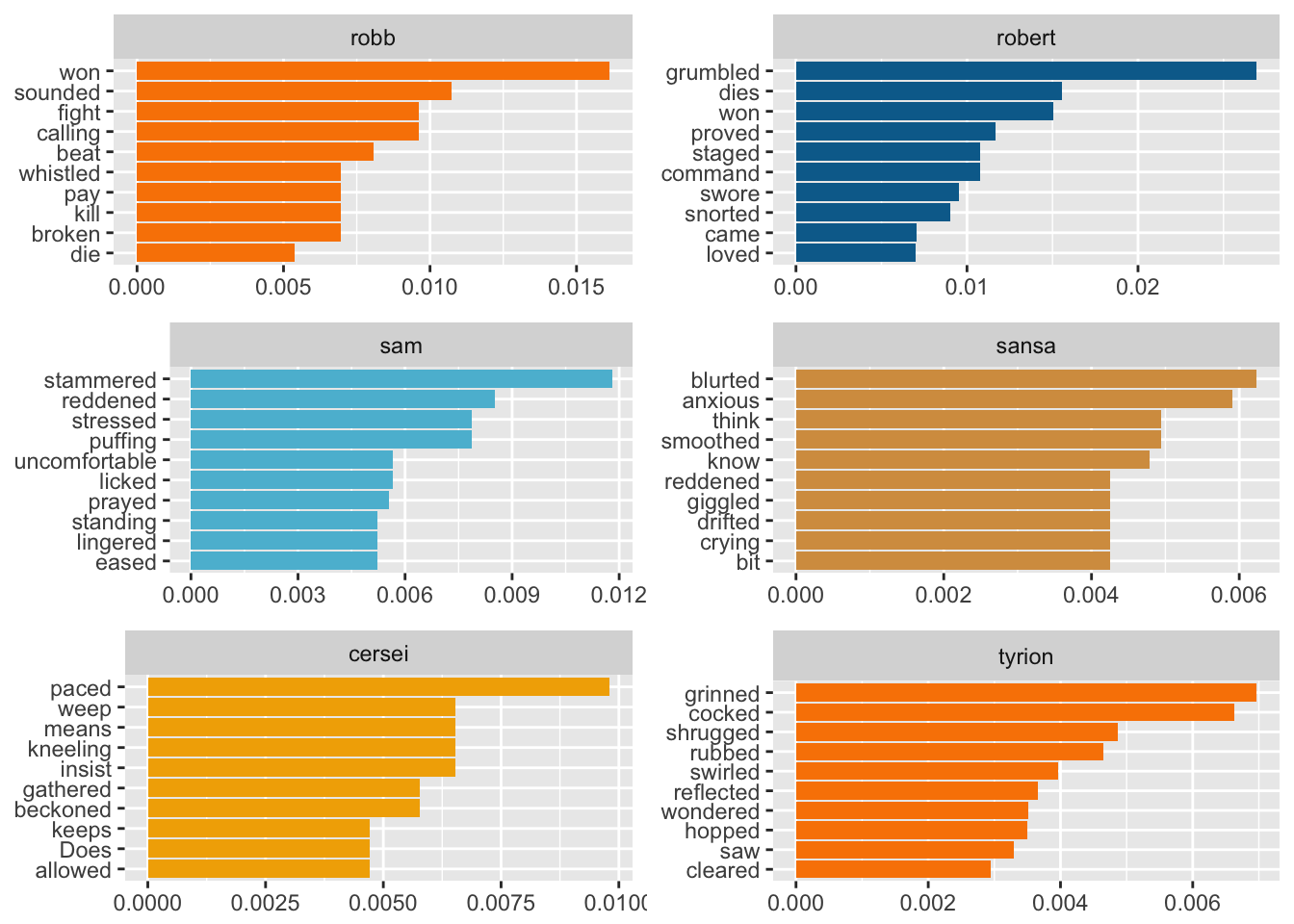 These are fun to see!

These main characters have genders, so we can use the same technique as we used above to calculate the log odds ratio for words associated with male or female main characters. 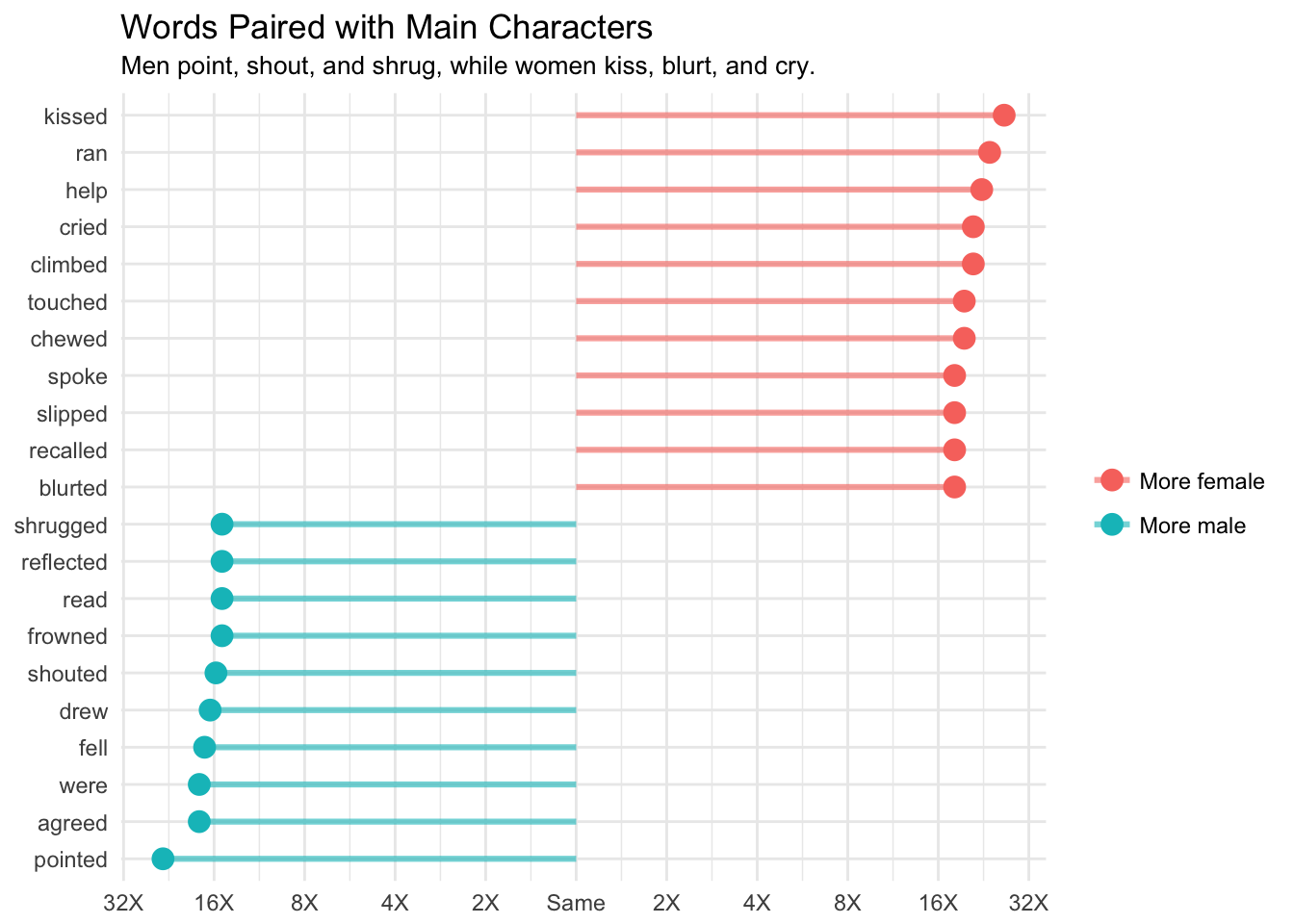 There are some big differences in the relative occurrence of words associated with male and female named characters. I think it’s important to note that we’re working with a relatively small dataset related to 38 named characters. That partially explains why some of the log ratios are so large.

Still, we notice that there are differences in the dependencies of words to characters of different genders. In a future analysis, we can look at how these relative frequencies change for certain characters over the course of the books.

This has been a fun analysis to work on, and I welcome any thoughts or questions!