It’s fairly well known that, for a subscription business model, subscriptions that are billed annually are more valuable than subsciptions billed monthly. That’s why many SaaS companies use the slightly misleading tactic of displaying a monthly price with an asterisk that indicates that the amount is the monthly amount of a subsciption billed annually. The prospective customer has to either multiply the amount by twelve to see what he or she will actually be billed, or lose out on this “deal” and pay more to be billed monthly.

In this analysis I will outline the effects that the plan interval can have on churn, average revenue per customer, and lifetime value. This post will finish with a proposal to lower the relative cost of annual subscriptions to make them a more attractive offerring to customers. 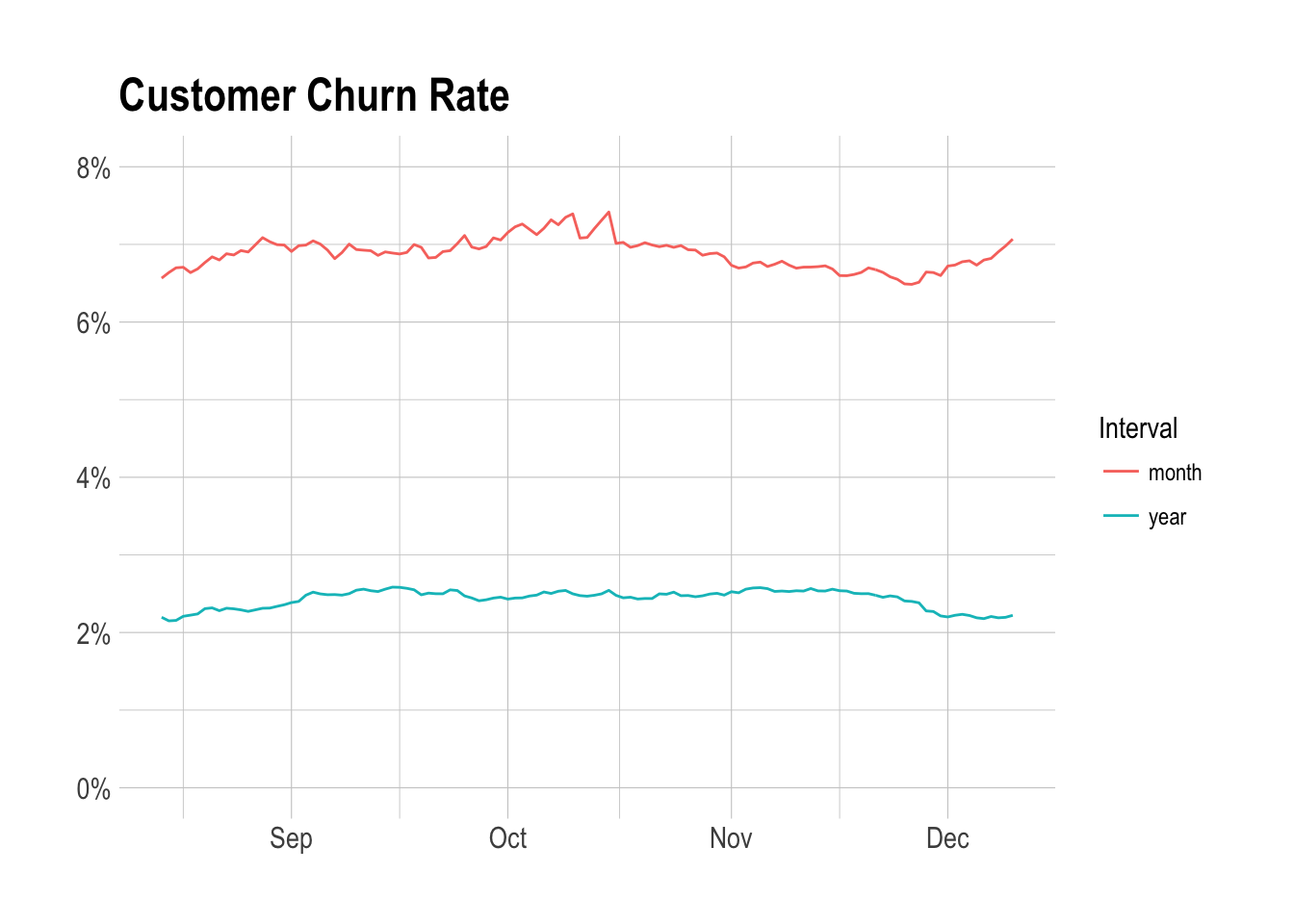 As of November 2017, approximately 57% of all active subscriptions are billed monthly (source). We can use this number to calculate the overall churn rate as a function of the percentage of subscriptions that are billed annually. 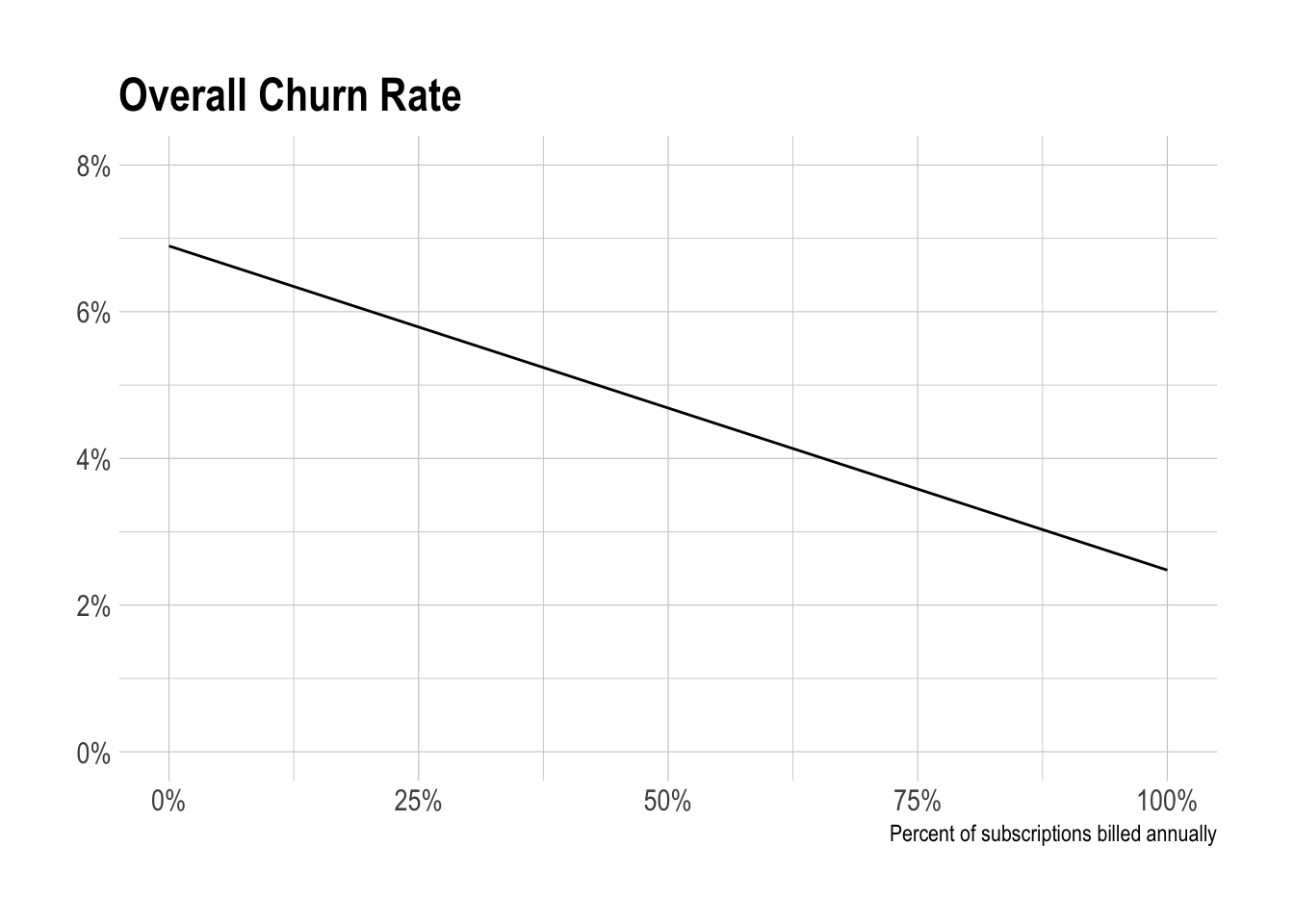 This graph illustrates the theoretical effect that annual billing could have on the overall churn rate. This is likely the maximum feasible effect, based on the core assumption that an annual customer that would have subscribed to a monthly plan churns at the same rate as customers that had already been subscribed to annual plans. In practice that assumption probably wouldn’t hold, but we would still likely see a decrease in the overall churn rate.

If we were able to increase the proportion of all subscriptions that were billed annually from 47% to 60%, we could decrease the overall churn rate by around 1%, which would be equivalent to a 20% relative change. This would have a huge impact on Buffer’s financial health. The chart below illustrates this. 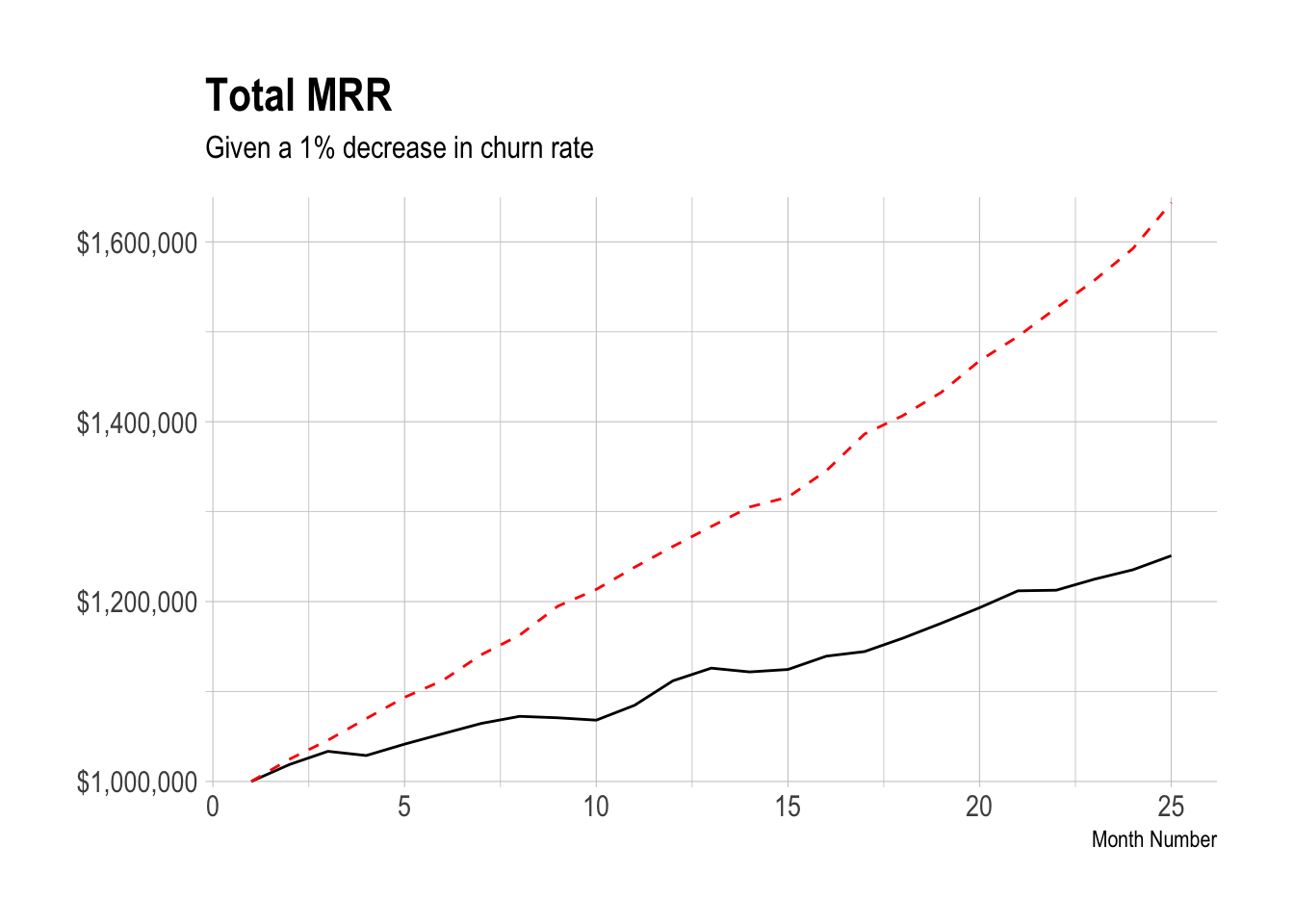 The plot shows the effect that decreasing the churn rate from 6% to 5% would have on Total MRR over the course of 24 months, given that everything else remained constant. The solid black line represents how MRR would grow given that new MRR is around 7% each month and churned mrr is around 6%. This isn’t too far off of what we actually see. The red dotted line represents the scenario in which new MRR remains at 7%, but churn decreases from 6% to 5%.

This is slightly wishful thinking, based on the assumption that new MRR will be somewhere around 7% total MRR each month. At some point saturation takes effect, and there would likely be shocks to the market, but it is still interesting to see what a difference 1% can make over time.

Another advantage of annual billing is the fact that a large churn of the customer’s revenue contribution is paid up front, instead of over the course of 12 months. That added cash can be used to further the progress of achieving Buffer’s vision of self-determination. We can use the data from this Look to calculate the average revenue per paying user. From now on let’s call this ARPPU.

Let’s plot the density functions of the ARPPU for customers of monthly subscriptions and annual subscriptions. These are only customers that have been charged successfully since the beginning of 2016. 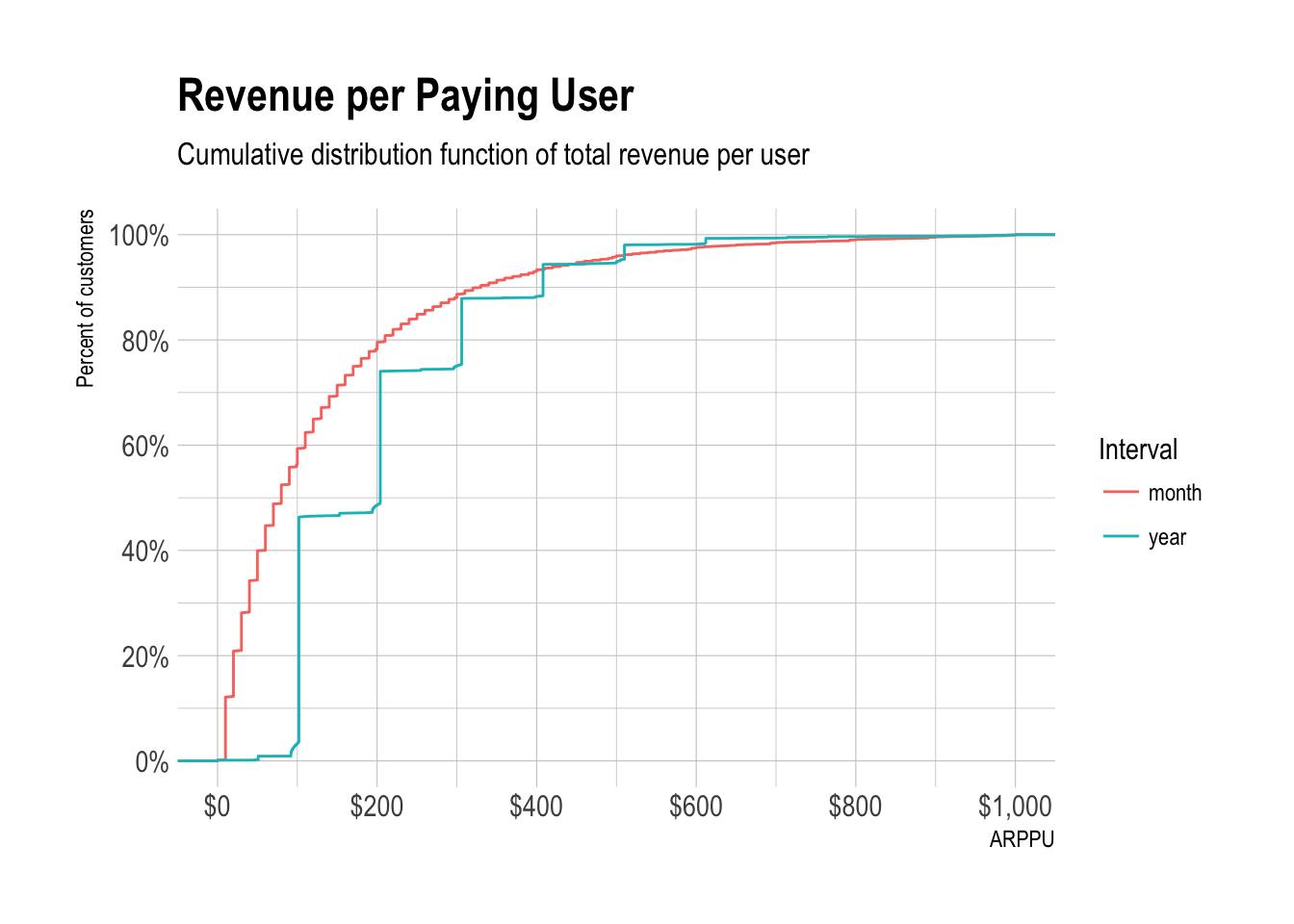 The plot has some interesting characteristics. The ladder steps of the yearly customers’ ARPPU are very distinct and dramatic – this occurs because of the large payment amounts that occur each year and the high churn rate at the end of that yearly period.

The overall effect that the billing interval has is a large increase in lifetime value.

At Buffer, we generally calculate lifetime value (LTV) by dividing ARPU by the monthly churn rate. We can apply this approach to different user segments and calculate the lifetime value of customers that subscribe to monthly and annual plans.

First, let’s calculate customer lifetime, which is the inverse of the monthly customer churn rate. In other words, how many months is a new customer likely to stay subscribed? 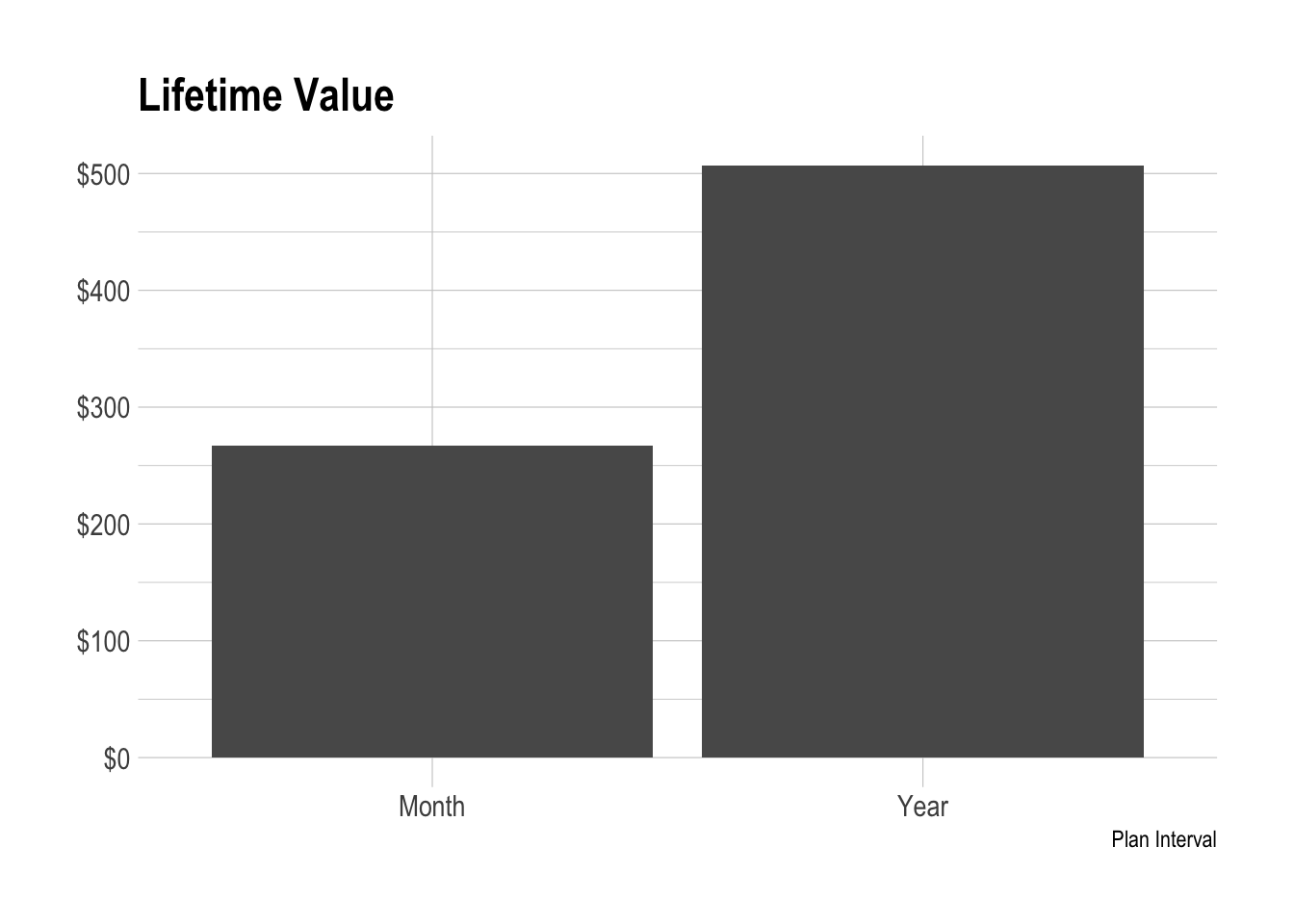 Based on this basic calculation, the lifetime value of a customer subscribed to an annual plan is around 90% higher than that of a customer subscribed to a monthly plan. The cherry on top is the fact that more of that value is realized up-front as a yearly payment. Given the fact that there is no added cost to supporting an annual customer, this is a good deal. That’s why Hootsuite gives people a 34% “discount”.

I hope I’ve convinced you that annual billing is good for Buffer’s finances. There is a lot we can do to promote annual billing - some of which could be considered low hanging fruit. We could display the prices of annual plans, in any form, on the pricing page. We could also default to diplaying the price of annual plans in monthly amounts, as Hootsuite does. I think that we can do this in a way that is less misleading, while informing the customer of discount they would receive (or how much more they would have to pay).

However, the biggest impact we could have would probably come from some sort of change to our pricing structure. In particular, the cost of annual subscribtions relative to monthly subscriptions could be lowered. Instead of a 15% discount resulting in an end price of $1010 (ouch), we could offer a 20% discount on the yearly small business plan and offer it for $79/mo*, billed annually. Instead of a $102 price point, we could offer the Awesome plan for $8/mo, billed annually.

By distributing more customers to annual plans, we effectively reduce churn, increase LTV, and increase cash in hand. We would likely see ARPU decrease and the churn rate increase for users on annual subscriptions, but the difference in LTV would still be vast, and more importantly, the overall LTV value for Buffer customers would increase.

Overall, we have room to give customers a bigger discount, which would result in Buffer making more money. It is a win-win. There is a big opportunity here, and I would love to discuss possible experiments we could run to make a big impact on Buffer’s future.